This is a page housing a tutorial to using the alias command in Cortex Roleplay in order to make an alias that contains of every command with a semi colon. 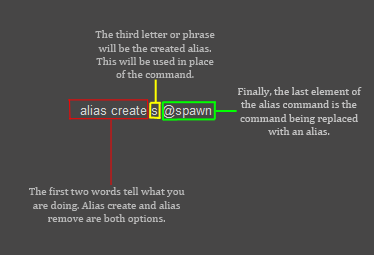 The alias command has the following arguments.

(Words in parentheses are second argument if any)

[Square bracketed words are the third argument if any]

An alias can spawn a custom unit like a shortcut. Aliases you made previously carry over into the next match that you play, and can also be used in the creation of other aliases.

This, when executed, will spawn 5 marines with the warpig model, using the immortal weapon, with a voidray attached to the barrel of the gun and scaled down.

Aliases are stored in bank files, causing them to be shared with every other map with the same bank file. For example, Melgenyavik and Stuttburg both use Shefford's bank file, causing any aliases to be transferred between them but not to map using Thrikodias's bank file, like Harrowing Arctic.

Retrieved from "https://crp.fandom.com/wiki/Tutorial:Alias?oldid=5456"
Community content is available under CC-BY-SA unless otherwise noted.